Most times when I visit a graveyard where my ancestors are buried there is no headstone to mark their time on earth. Even so, I still love to walk the graveyard reading the headstones of their neighbours. Neighbours not only in death, but sometimes also in life, for often I find many my ancestors would have known in the village community. They might have been friends, they might have just been acquaintances or they might have even been enemies, but they are all characters of their time and I enjoy meeting them and wondering about their lives and relationships with my ancestors.

Recently, I visited the village of Blanchland in Northumberland which is the area where my 2 x Great Grandfather, Dr Frederick Williams Cadwalleder Beavan, grew up. The eldest of nine children, his parents were Dr Frederick Beavan and Barbara Leyson. In about 1810, the family moved from Llansamalet in Glamorganshire, Wales eventually settling in Blanchland by about 1812 after making a couple short stops at a couple of nearby villages for the baptisms of new babies. Various members of the family stayed in the area until at least the mid-1850s.

Frederick senior passed away in 1844 and was buried in the graveyard at St Mary’s Abbey, Blanchland. He has no surviving headstone so I walked the grounds anyway and read the headstones that had survived. One inscription in particular really caught my eye: 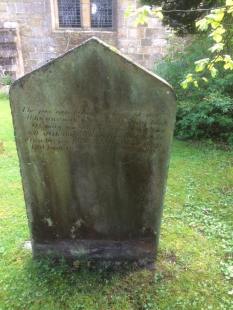 The poor man’s friend lies here at rest. Who was with peace and plenty blest. O may an angel guard his grave, till with the virtuous and the brave. His ashes rise from death’s sweet sleep and from the grave to Jesus leap.

While the other side says:

Erected in memory of John Bell who died April 16th 1811 aged 60 years. 26 years a miller at Blanchland. His body has returned to the dust. His spirit breathes in a milder clime above

John Bell sounds like a lovely man. He had passed away a little before I think my family was living there, so they probably did not know him personally. I cannot find a record of his burial, although I have not checked the actual parish registers. I do know that there were quite a few babies called John Bell born about the same time as he in nearby villages. In the 1841 and 1851 census’ there are some Bell families in the village so they possibly are relatives of John.

It was nice to meet you John Bell, a man who obviously made a great impression on his neighbours, may you continue to rest in peace.

One thought on “The Poor Man’s Friend – John Bell”

Follow In Search of Men and Women with Initiative – Solving Family Puzzles on WordPress.com

We are custodian of Queensland's natural and cultural heritage, caring for more than a million items and specimens in collections that tell the changing story of Queensland.

There Will Be Books

Reviews of the children's and YA novels I have read

Dreams and Adventures at Cosy Cottage

Family History Originating From the Pale of Settlement

When Timber Makes One Still

"Everyone needs beauty as well as bread, places to play in and pray in, where nature may heal and give strength to the soul" -John Muir

Uncovering the story from the things left behind.

Library and Archives Canada Blog
A SILVER VOICE FROM IRELAND

An Eclectic mix of items from a 'senior' blogger in Ireland looking at the past and keeping an eye on the present.

Meet those who have gone before..

A research home for Historical Fiction Writers of the Antebellum Period, by A.M. Cal, author of the historical novel "Eighth Wonder" The Thomas Bethune Story. You know of Mozart and of course Bach and Beethoven. But do you know Thomas?

A collage of ephemera, snapshots, research and historical misadventure

Family history across the seas

My family history in Australia and overseas and related migration research

A SILVER VOICE FROM IRELAND

An Eclectic mix of items from a 'senior' blogger in Ireland looking at the past and keeping an eye on the present.